Next week is show week – Synchron Productions’ Chronicargo, part of the New Moon Festival at the White Bear Theatre in Kennington, London. Working with this new company has been great fun – we’ve devised the piece as a group but with a director guiding us through the process, providing the initial and overall vision and scripting our work as we go along. Working in this way has proven to be pretty successful in terms of both creative satisfaction and productivity, and is certainly a method I hope to utilise for future projects. 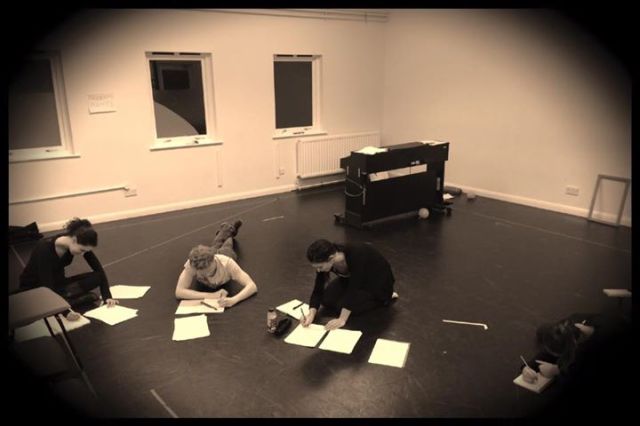 Taking notes in a Chronicargo rehearsal

Without giving too much away, my favourite scene has called for a spot of animal studies during the rehearsal and devising process. Having spent a few Laban sessions being a komodo dragon during my training at East 15, I was delighted to do more animal work.

The two animals I am working with – the flamingo and the wolf – obviously call for a very different physicality. We’re following the idea that these creatures have evolved to a more human form, kind of like Cat in the Red Dwarf series, so we started playing with embodying the animals in their full animal form, then gradually moved along the scale to human. We wanted to keep certain physical and behavioural characteristics from the animal and exhibit them in a human body.

For example, my flamingo, Fiona (I love a bit of alliteration), has kept the tendency to stand on one leg and ruffles her feathers every now and then when either perturbed or showing off. Thus I spend much of that scene wobbling on one leg (I haven’t done ballet class in a while so am a bit out of practice!), my knuckles on the small of my back and my arms bent out behind me for wings. Thinking about the vocal qualities Fiona the flamingo might have, I decided on having a musicality to her speech, with the tendency to go up and down in waves.

For the wolf, Accalia (from Romulus and Remus fame), I planted her weight more firmly and evenly across both feet, and gave her a touch of a snarl every now and then. The voice is deeper and rooted firmly in the belly, with a more limited vocal range. I still need to do a bit more work on the upper body I think, possibly experimenting with hunching the shoulders forward a little or using the hands and arms more.

Our final rehearsal is on Sunday, then we open on Monday! If you’re in or around London and fancy an evening of new work, take a look at the New Moon Festival event page on Facebook. We are performing at the White Bear Theatre in Kennington, and each of the three pieces in the festival will be performed every night from 9-14th November, so it’s worth getting a triple bill ticket of £18 to see all three!

I am an actor, puppeteer and writer from Yorkshire, now living in the beautiful South West. I trained at East 15 Acting School and the Curious School of Puppetry. You can find out more about my work at www.jennierawling.com